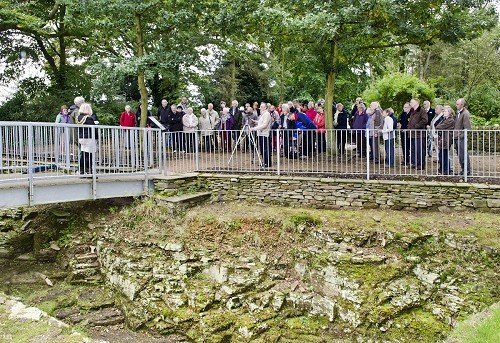 The Trust has three areas of interest.

From 1998 to 2009, all accessible areas of The Old Vicarage garden and parts of the fields were dug with many members of Greater Manchester Archaeological Federation Societies taking part. There was a small dig in the triangular field in 2011. Although more might be done in the fields, the hard physical work has now moved elsewhere. Two actions remain for the OV site. (1) The viewing area with a bridge over a section of the Iron Age ditch is about to be transferred to Stockport Council. (2) As part of the final report to HLF on the broader Mellor Heritage Project 2007-9, John Roberts wrote an overview of the excavations and their significance plus two volumes of specialist reports. Peter Arrowsmith is now extending this for publication as a BAR report, with Steve Bellshaw adding drawings.

Shaw Cairn on the top of Mellor Moor, the southernmost of the three spurs, was excavated by a small group in the 1970-80s and the fragmentary records of their work were put together in 2000 in a report by Victoria Mellor, a student on secondment at GMAU. Mellor volunteers, under the direction of Peter Noble and Donald Reid, revisited the site in 2008 and 2009 and among the finds were around 100 amber beads buried in a cist with the “Mellor princess”. At the same time, Alison Sheridan of National Museums of Scotland looked at the pottery from the 1970-80s dig and described it as the best collection of Early Bronze Age pottery in the NW and colleagues at Edinburgh University added surprisingly detailed information on the cremated bones. Andy Myers has reported on the Mesolithic and Neolithic flints. Clearly, there is much more to be learnt, particularly about the earliest occupation of the site and where people lived during the Bronze Age. We have been fortunate in interesting Bob Johnston of Sheffield University in the site. In July 2011, he came with Sheffield students and joined Mellor volunteers, particularly opening trial trenches in the adjacent fields. The dig was repeated in July of this year, but the weather was against us! The farmer had not been able to get his silage cut, which meant that nothing more could be done in the fields and a longer route had to be walked to the top of the hill. As I write this, we are hoping for better weather when we open the site on July 21-22 during the Festival of Archaeology. Small-scale, or possibly bigger, excavations will be carried out in future summers. The work is supported by a small grant from the Prehistoric Society and Trust funds, but is not expensive.

The Trust’s major effort is at Mellor Mill, built by Samuel Oldknow in 1790-92 and burnt out in 1892. Now the area looks like old woodland. The mill itself is part of a wider complex, which includes: an area nearer the River Goyt with a second (Waterloo) wheelpit, workshops and stables; Oldknow’s mansion and garden across Lakes Road; three millponds; a weir where Oldknow diverted the river; and an apprentice house adjoining a model farm. GMAU carried out a survey in the 1980s and recommended “excavation, conservation, and presentation of the site” but nothing came of this. Our trials digs in 2009 and 2010 found bases of walls, cellars and bits of textile machines. Now we have done something more substantial. We received a grant of £15,000 from the Association for Industrial Archaeology (AIA) to uncover and conserve the Wellington wheelpit, which was under the centre of the mill. 120 tons of soil, stone and other debris were removed and the magnificence of the curved base of the wheelpit was displayed. When weather permits, conservation with lime mortar will be carried out. A path leading down to a fenced viewing platform provides public access and attracts many visitors as they enjoy a walk along the Goyt valley. The six-storey, 400-foot mill was the largest of its time and the template for the architecturally impressive mills that spread through the region. As Mark Sissons, Chairman of AIA, said at the opening on March 10, 2012, it eclipsed earlier mills, such as Cromford and Styal, which were more domestic in style.

Volunteers are continuing to work on the site. Four stairways leading down to the wheelpit are being cleared. The 7-foot high tunnel carrying the drive shaft from the Waterloo wheel to the mill is being excavated. The cobbled surface in front of the mill is being exposed – but not all of it is just roadway. Part is under the grand staircase leading to the “posh” front entrance of the mill. Volunteers found holes among the cobbles. It was a stable, where visitors to the mill could leave their horses. Some holes divided stalls and some were drainage channels. Other excavations are tracing the corner of the mill walls at the north end.

This uncovering of these small parts of the mill demonstrates how valuable it would be to open up all three areas as an industrial heritage site in a small country park. Pace Andrew Selkirk, this needs a large grant, approaching £1,000,000. The first bid to HLF failed, but we were encouraged to try again. The second bid coincided with a bid by British Waterways for another of Oldknow’s promotions, the Peak Forest Canal with its great aqueduct, flight of locks, warehouses and lime kilns, which transformed Marple from a small village to an industrial town. HLF took the view that there would be greater value if the projects were combined. After fruitful discussions with Nick Smith and Fiona Turpin from British Waterways, now the Canal and River Trust, we jointly submitted in June, 2012, an application for “Revealing Oldknow’s Legacy, Mellor Mill and the Peak Forest Canal in Marple”. Decision time for the first Development Stage is September!