On 30 April 2012, the items discussed included the following.

Changes to the Trust were agreed, subject to approval by the Charity Commission.

The Trust Deed dating from 17 January 2000 had as its objects:

To promote the investigation, interpretation, and preservation of the archaeology of the area surrounding Mellor Church and of other parts of Mellor, Stockport, in the County of Greater Manchester, and to organise displays, educational activities, or other means of bringing information on the history and archaeology to the notice of the public.

The excavations in The Old Vicarage garden were completed in 2009. Although more work could be done in the adjoining fields, this would probably only dot i’s and cross t’s (unfortunately, we are not allowed on the fields to the east, where there might be new features near the top of the hill). There was a small excavation in the triangular field in 2010 but nothing more is planned. Interest has shifted to Shaw Cairn on Mellor Moor and the Mellor Mill site. It is proposed that the objects should be changed to:

The four residents close to the OV site were named as ex-officio Trustees.  One of them, Peter Jenner, has now left Mellor and the Vicarage is empty.  It no longer seems appropriate to have these localised ex-officio appointments. The clause defining the Trustess will be changed as below. We can co-opt to reflect areas of interest, both geographical and functional. George Burgess from Shaw Farm was recently co-opted;  Rachel Sewart from Roman Lakes and Chris Walters, who looks after the website and newsletter, have been invited to be Trustees and both have agreed to serve. The present Trustees are: three ex-officio, John Hearle (re-elected as Chairman for the next year), Stan Bannister, John Hodgson; four nominated, Chris Baker, SMBC, Bob Humphrey-Taylor, Mellor Society, Ann Hearle, Marple Local Histroy Society, Andrew Sanders, Mellor Curch PCC; nine  co-opted, Norman Redhead, Donald Reid, Miranda Galloway, Frank Galvin, Maxine Wild, Hilary Forrest, Paula Whittaker, George Burgess, John Roberts.  The ex-officio members will be co-opted as Trustees after the change

After seeing two suggestions, a vigorous discussion settled on a third: a man on horseback taken from the carving on the font in Mellor Church. Maxine will be producing the design.

There have been several enquiries about school visits to the Old Vicarage site. These were excellent when we were funded by HLF, but now SMBC only offer sessions at Stockport Story Museum. Pauline has offered to run visits in Mellor. A small group will meet to plan how to organise these.

Two final pieces of the Mellor Heritage Project 2007-9 are heading to fruition.

The terms of the handover of the public viewing area, which includes a bridge over the Iron Age ditch and interpretation boards, have been agreed between the owners, the Hearle family, and SMBC Greenspace. The formal documents should soon be signed.

A full academic account of the archaeology of 12 years of excavation on the OV site is being prepared for publication as a British Archaeology Report by Peter Arrowsmith. This will put the story of Mellor in a wider context. It will include not only a record of the trenches, but also all the many specialist reports. More finds will be drawn. Fortunately, the Trust has built up sufficient funds to cover the costs.

The opening of the wheelpit was attended by around 150 people. Since then, there are frequently up to a hundred visitors dropping in each Saturday and Sunday and saying “Wow!”. A collecting bucket is providing income divided between the Trust and the fund for the exhibition centre at the Roman Lakes. Plans and costings are being developed for the centre.

Work is continuing to clear the five sets of stairs leading from the wheelpit. Exciting discoveries are being made below the main entrance to the mill. A keen-eyed volunteer found a token to be used for purchases in the “truck shop” and bearing the name of John Clayton, mill manager. A cobbled surface is the floor of a stable, which is reached through arches under the steps to the front door of the mill. Visitors could leave their horses there while they conducted their business. Donald and Maxine have been uncovering more of the wall at the north end of the mill.

The token and the mill entrance, arch to stables on left. 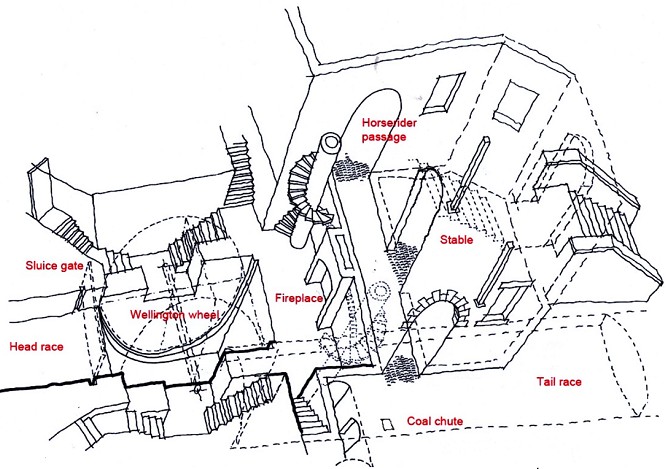 John Riley’s drawing of the wheelpit and entrance area.

Much more could be done with more volunteers. Bob Humphrey-Taylor (07710 964 046, This email address is being protected from spambots. You need JavaScript enabled to view it.), who is directing the work, writes:

The work down at Mellor Mill is progressing and lots of exciting things are being discovered about the building and how it worked.  However, we are just not getting sufficient support to really get going this spring - do come on down and spend a few hours any weekend between 9am and 3pm Saturday or Sunday.  We are now working on the main foundations of the mill and beginning to make sense of the building footprint.  Of course, over 100 years things changed and the information we have from paintings and maps is not necessarily the way it all was on the day of the fire.

The bid to HLF

On March 16, John Hearle had a phone call from Charlotte Hazlewood of HLF to say that our application, Mellor Mill and Oldknow’s Legacy, was unsuccessful. There was severe competition for limited funds. Our bid was regarded as very strong and was recommend for acceptance by the grants officer. We might have been successful if British Waterways had not put in for a project “Enriching Marple’s Waterway Heritage”, which focussed strongly on Samuel Oldknow’s part in promoting the Peak Forest Canal and included work on the aqueduct and limekilns. The committee took the view that they would get more value for money if the two bids were combined.

We are now working hard on a new joint bid with Nick Smith of British Waterways, soon to become The Canal and River Trust, and input from Marple Civic Society, who led the vision to enhance the canal corridor and its structures. The application has to be in by early June. If supported by HLF, the timeline would be: stage 1 decision, September 2012; development stage; stage 2 submission, March 2013; HLF decision, June 2013.

Bob Johnston has now sent us a draft report on the 2011 survey and excavation at Shaw cairn. The final version will be put on the website later. Bob will come again with Sheffield University students for a dig from July 2-13, supported by the Mellor volunteers. On the weekend of July 21-22, the site will be open as part of the Festival of British Archaeology. Next spring, a study day will be held to discuss how Shaw Cairn fits into the wider scene of the triangle between the Goyt, the Etherow and the ridge on the east.

Two events are being planned.  A “Mellor Mill Fun Day” will be based at the Roman Lakes Leisure Park on Sunday September 23. This will be a combination of an Archaeology Open Day and a Fete. A Study Day, Mellor and the Textile Industry, will be held on October 27.