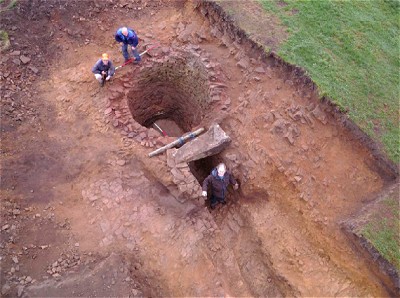 In September 2009 the Mellor Archaeological Trust carried out an excavation at Knowle Farm in Mellor. The excavation was on the site of an anomaly detected during a magnetometry survey performed by the Trust in 2007. The excavation revealed the substantial remains of what appears to be a Lime Kiln. The remains consisted of a stone built, oval, ‘Pot’ measuring 2.75 m by 2.50 m and 2.76 m deep.

At its base on its west side the Pot had an opening, the Eye, from which ran a 3.5 m stone lined flue. There was no direct dating evidence for the structure however indirect evidence suggests two equally probable dates. High grain prices during the Napoleonic wars and the arrival of the Peak Forest canal at Marple in 1796 point to a construction date around 1800 while the map evidence tends to suggest a date sometime between 1836 and 1886. After recording the kiln was backfilled the ground reinstated and a large ‘gate post’ stone removed during excavation positioned over the centre of the Pot.

Click here for a full report in pdf format.