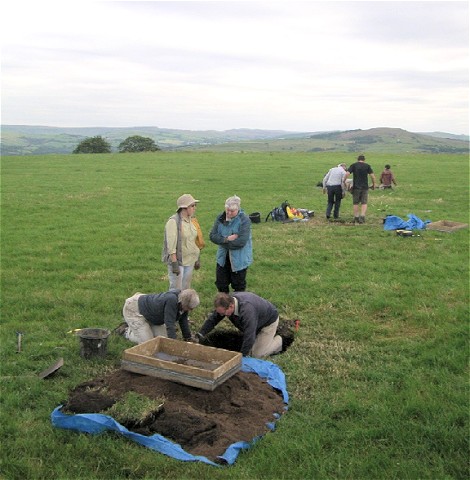 A programme of archaeological survey and excavation was undertaken during June/July 2011 at Shaw Cairn, Mellor Moor, Stockport. The cairn is a multi-phase monument that was the focus for the deposition of human inhumation and cremation burials during the Early Bronze Age. It was first excavated during 1976-88, and more recently in 2008-9. The aims of the 2011 fieldwork were to determine the character of the stone-built structures located in the environs of Shaw Cairn, and evaluate the evidence for human activity on the broader plateau on which it is sited.

Topographic and geophysical surveys failed to find evidence of the stone platform that was excavated in 2008-9. The surveys did show, however, that Shaw Cairn was not an isolated monument. In addition to the platform, there may have been at least two other mounds, both smaller than the main cairn, sited on the plateau.

The excavations produced both artefacts and features that may be earlier than or contemporary with Shaw Cairn. This comprise a group of stake-holes and an assemblage of worked stone, including both Later Mesolithic and Late Neolithic / Early Bronze Artefacts.

In conclusion, the report highlights that there is scope for further archaeological investigations in the environs of Shaw Cairn, particularly geophysical survey, test pitting and evaluative excavation.

This document is a summary report on the programme of archaeological survey and excavation at Shaw Cairn, Mellor Moor, Stockport. Shaw Cairn is a multi-phase monument that was the focus for the deposition of human inhumation and cremation burials during the Early Bronze Age (c.2200-1700 BC). The report reviews the background, aims and methodology of the project, and summarises the quality and nature of the information retrieved.

Click here to read a full pdf copy of the 2011 Report on the archaeological investigations at Shaw Cairn.